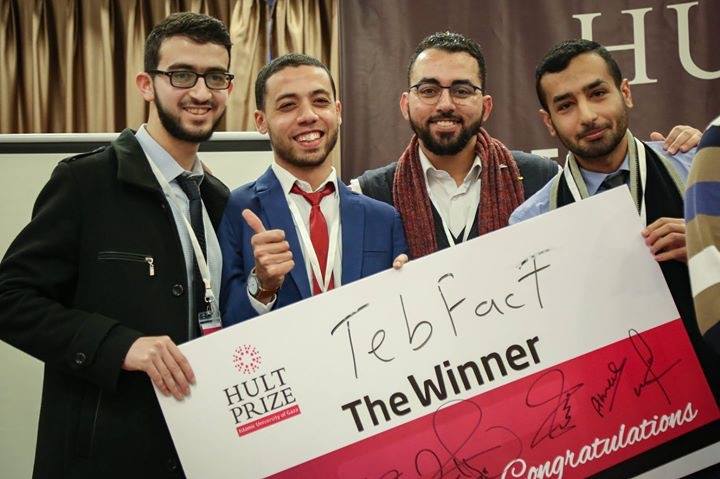 A team of medical students from the Islamic University of Gaza has won the first place in the “on-campus” competitions of the international “Hult Prize”, which is considered as a “Nobel” prize for youth entrepreneur initiatives, fully supported by the former USA president, Bill Clinton. The team won for their project called “Tebfact”, an online platform providing evidence-based public-oriented medical articles. The team will be presenting Palestine in the Regional Competitions in the next few months.

The first idea of this project popped up in the students’ minds while they were doing their rotations in public hospitals, seeing many people overwhelmed with myths and false beliefs about medicine. They first launched their educational medical platform. Thereafter, they developed their project by planning to add additional features for their website, those include paid consultations and regular follow-ups for patients registering at the website.

The arbitration committee, which included academic professors, businessmen, entrepreneurs and specialized business incubators, set several standards for evaluation of the competing projects, those are: creativity, sustainability, profitability, feasibility and scalability.

Every year, Hult Prize sets a specific goal that competitors are required to design their proposed projects to achieve. This year’s goal is to find a way to employ 10,000 person within 10 years, as a solution for unemployment problem, and, therefore, achieving the basis of sustainability.

On-campus organizing team of Hult Prize consists of volunteering students from different faculties at the Islamic University of Gaza. A hardworking team, led by Ahmed Natoor, spared no effort organizing the local competitions over a 2-month period, from October to December, 2018. Several workshops were held for the competing teams to develop their ideas into applicable projects, those workshops targeted specific objectives like leadership and cooperation skills, presentation tips and the best applicable business models. On-campus competitions included three phases. In the first phase, 91 teams competed, 28 of them were selected to pass to the second phase, the semifinals, which resulted in only 7 ambitious teams to compete in the local finals. Tebfact project successfully won the first place in the on-campus competitions making them officially a representative team of Palestine in the Regional Competitions.

In that regard, that Business and Technology Incubator (BTI) at the Islamic University of Gaza (the Golden sponsor) provided logistics, chose the trainers and directed the phases of the competitions. In addition, Supreme Council for Excellence and Creativity (the diamond sponsor), Sun Box Company (the Silver sponsor) and AlBasheer Light Company provided the financial support required for local competitions.

It’s noteworthy to mention that Hult Prize is an international prize in partnership with the United Nations, open for university students of different academic levels. Competing teams are required to find pilot solutions for different social challenges around the world, with a specific challenge set for competition every year, and the winner team in the global finals earns a 1,000,000 $ prize.